The demise of a long term relationship is always a great time to take stock of how you’re embracing life. Even notwithstanding that, I was long overdue for a hard look at how I was living versus how I wanted to be living.

Life gets busy and I’d been mostly on autopilot, simply following the same set of parameters laid out months or more ago. Routines, systems (or lack thereof), assumed constraints and more were all driving my daily activities, instead of beginning with the end in mind.

In the past, life redesign efforts involved my spouse, who is exceptional at projects like this. But now lacking that person, I involved my friend and colleague Nicole, a successful entrepreneur herself, former X Games snowboarder, and founder of the Happy Camper emotional intelligence courseware used by corporations like Facebook and Microsoft. 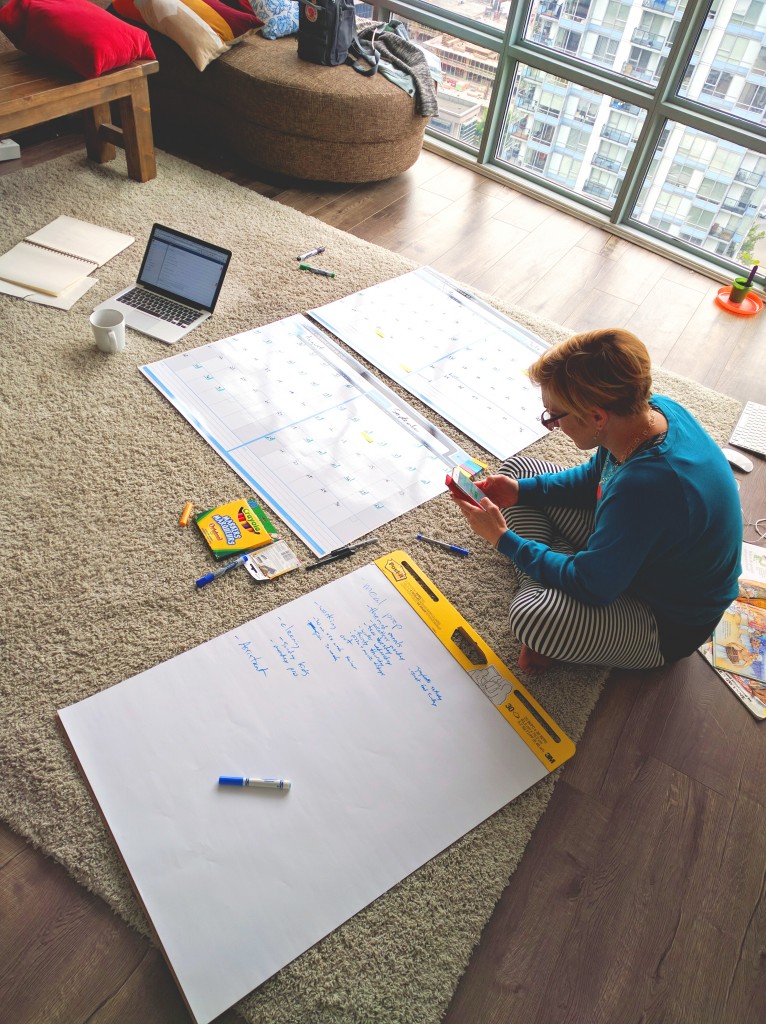 Nicole and I starting the initial whiteboarding phase of my Life Redesign project.

Nicole and I are both big whiteboarders, so we laid out several key issues:

These topics will be one or more blog posts of their own over the coming weeks, but I wanted to get started with my Life Redesign 2016 series by tackling the issue of family roles and expectations, specifically when it comes to cooking dinner.

Too often kids are regarded as princes and princesses to be served by their parents. We forget that not too long ago, a big family was a necessity more than a luxury. Kids were expected to contribute to the household and to the family business by taking on meaningful, large tasks at a young age.

People who only have one or two kids are often stunned when I tell them the range of things that my kids do for the house and me. Everything from taking out the garbage and recycling, to picking up sushi, getting groceries at the store across the street and more. I treat them as much like responsible young adults as their individual temperaments and personalities will allow.

EA Canada, where I learned as a young adult how to delegate my workload to others. 😉

When I worked at Electronic Arts Canada back in the ’90s, one of the job description bullet points specifically said “Push decision-making down to the lowest level possible.” They wanted us as managers to be driving responsibility down on to those who reported to us, so that employees could grow. It also allowed us to focus on the larger issues and be more transcendent in how we carried about our business on behalf of the company.

I carry this same philosophy into my parenting.

If I can push responsibility down onto kids, within reason, they’ll reap the rewards of increased accountability and independence, while I’ll benefit from the increased focus on larger issues pertaining to the family. Ultimately, I’ll be more happier and more fulfilled as will the kids. 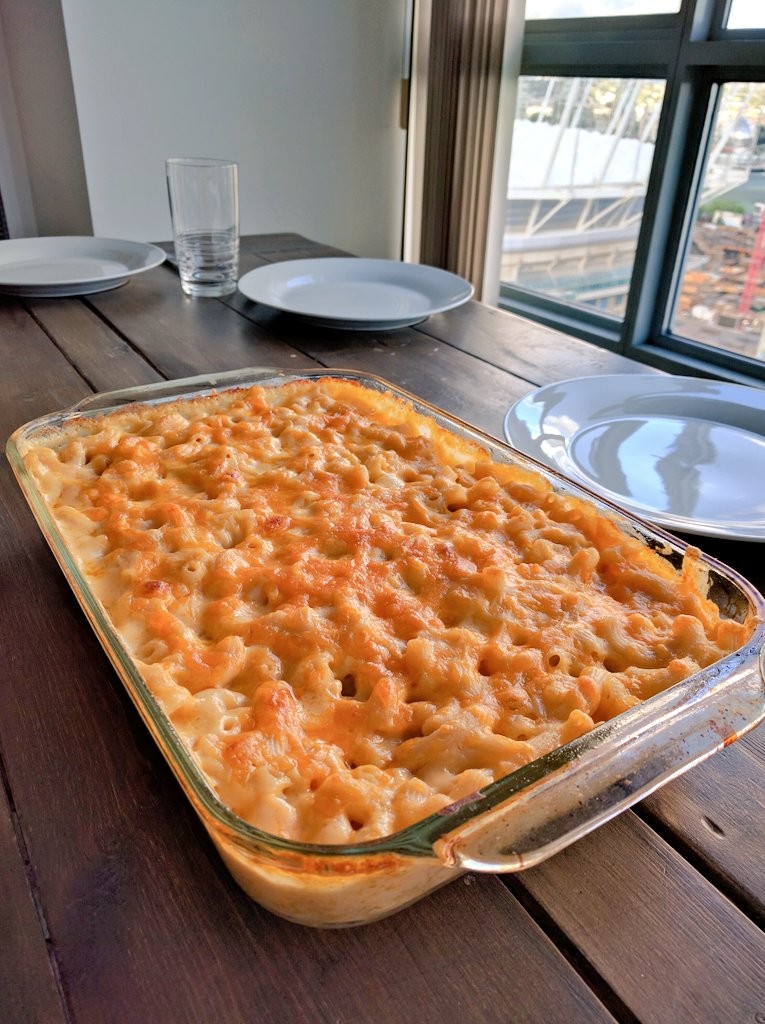 The gluten free baked mac and cheese the kids and Markus prepared.

One key area I wanted help with was meal preparation. In a happy coincidence, my two oldest kids had recently expressed strong interest in learning how to cook “all the meals and lunches too.” While that might be a bit of a tall order, I really wanted to capitalize on their new-found enthusiasm for cooking.

I’m not a cook myself and I take no particular pleasure in doing it, so I needed somebody to come into the house to teach. Separating five kids at dinner time to take two to cooking class wasn’t an option. But when I looked around locally for home-based kids cooking classes, the costs were astronomical, ranging from $200-$500 for a three-hour session. It wasn’t a reasonable activity at that price point.

So instead, I took an approach that I often take in life. I looked in the margins.

Most people read just the body of the text and give up when they don’t find what they want, concluding that it must not exist. When I read something like the local newspaper I often look at the extremities of the page, seeking the tiny little ad or event blurb that might otherwise be overlooked. It’s in the margins where life gets truly interesting and gems can are found. 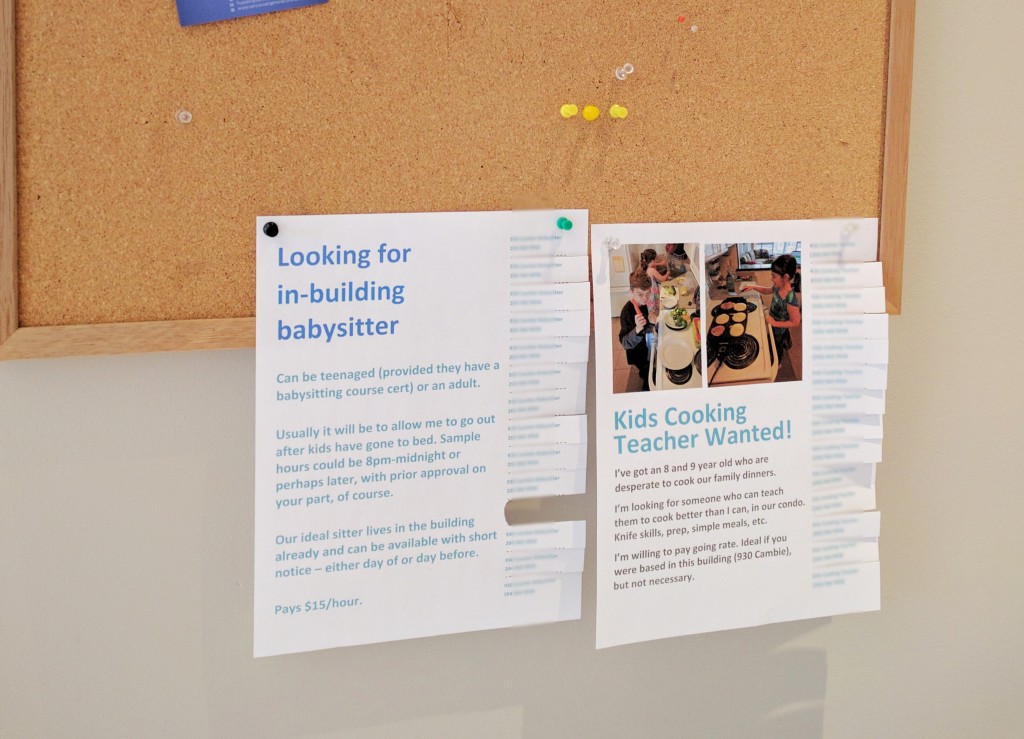 The ad I took out in my building lobby, looking for an in-condo cooking teacher.

With this in mind, I decided to look in our own building for our in-house cooking teacher. I drafted an ad, printed up the couple copies and posted it in our lobby and garbage room. The ad simply said I sought a cook or someone talented in the kitchen who would be willing to teach the kids in my place, two nights a week for $20 an hour. Within a couple days we had a few replies to choose from. We ended up meeting Markus a local cook who works at a restaurant in nearby Olympic Village and lives only a few floors below us. 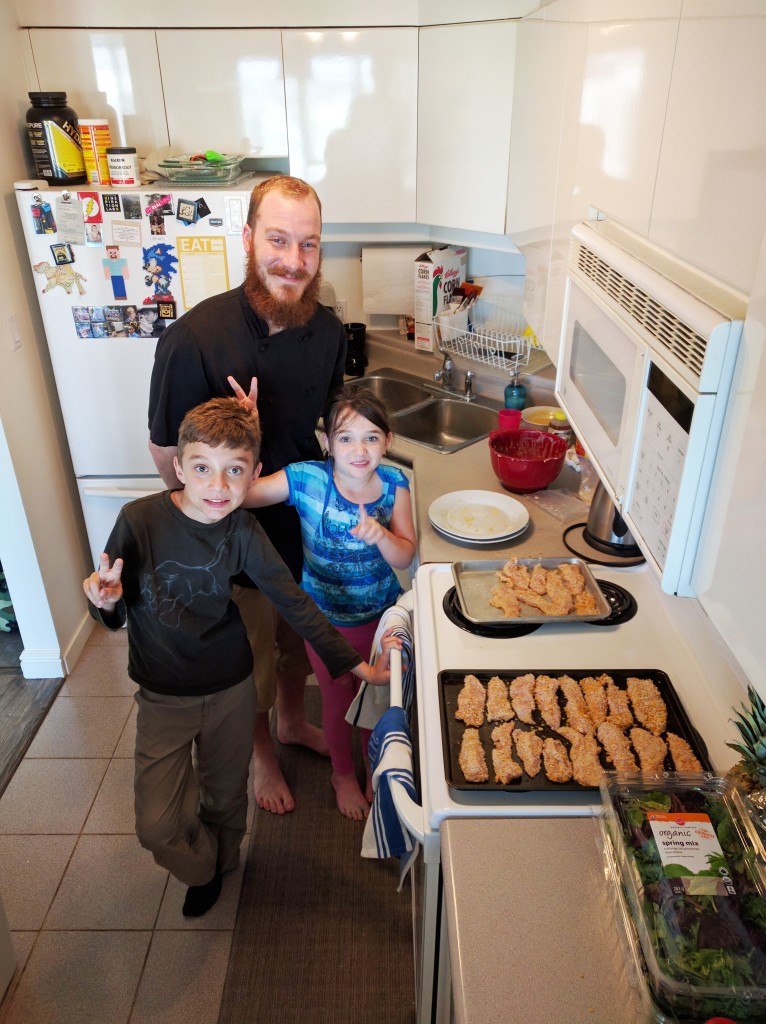 The two oldest kids in the kitchen with Markus after their debut lesson.

So far we’ve had four cooking lessons from Markus. The two dishes he’s focused on so far are a gluten-free baked macaroni and cheese, and home-breaded chicken fingers with a side Caesar salad. The kids cook these meals with Markus’ help at first, then the second time around with only his supervision (mostly).

The idea is that through repetition, we’ll teach the kids three or four different meals that they can make entirely on their own. This removes me from the kitchen – and quite frankly that’s probably a good thing as my meal prep skills are nowhere near what my ex’s were. It’s also teaching the kids extremely valuable life skills that quite frankly I never learned myself. I’m the kind of guy that for years ate hummus and pita as dinner, or angel food cake with strawberry milk as lunch. 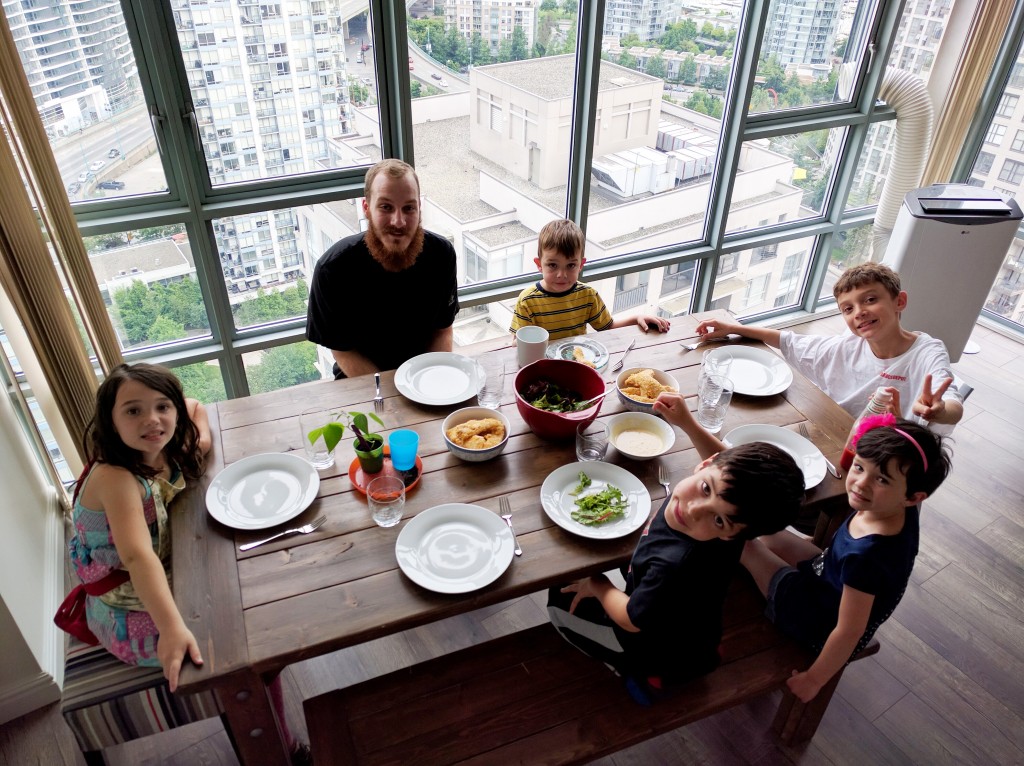 The kids, Markus and I sit down for a well deserved dinner as a group.

Had someone taught me how to cook at a young age, perhaps I would enjoy it more now. I intend to harness the kids enthusiasm as long as I can, knowing full well that it could flag at any time. Hopefully they’re interested and engaged long enough to pick up some basic kitchen skills and confidence, while also feeding us dinner.

Markus has become our regular dinner guest, which is rather nice because otherwise it’s just the kids and me. Having a new, young voice at the table enjoying the meal that the three of them have created is refreshing in and of itself.