Only if something is right in front of me will I do it. But if it takes even slightly more effort, I probably won’t.

In my day job, we use terms like “user friction” or “barriers to entry” to describe elements of design that prevent a user from doing the things we want them to do.

In my personal life, however, sometimes it’s beneficial to introduce a little friction to prevent myself from doing bad things that are all too easy to do otherwise.

A good example of this is spending too much time on social media when I’m on my phone. Recently I installed an application called Quality Time (Android only) to measure exactly how much time I spent on my phone and in what applications.

The results were truly horrifying. 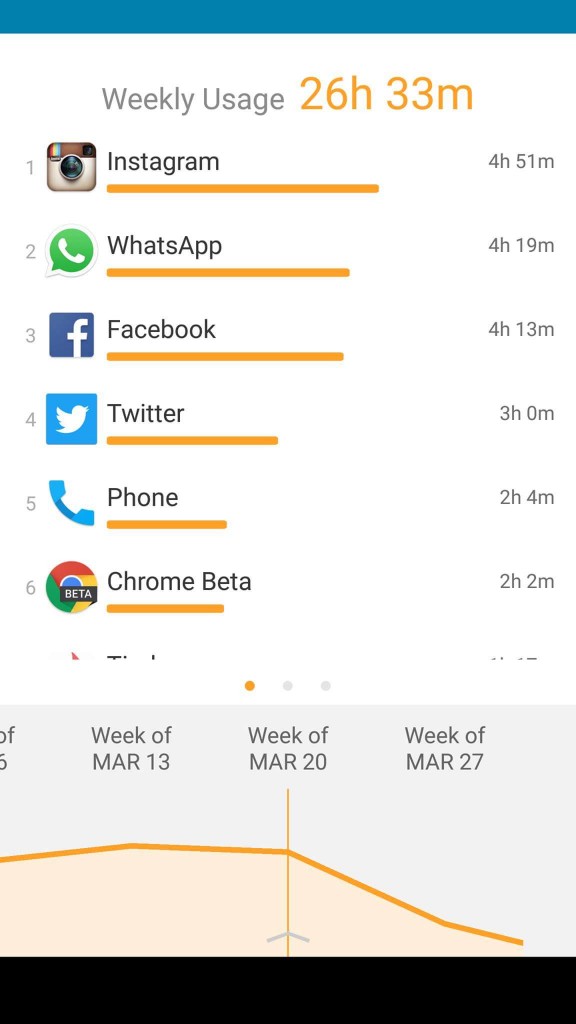 My average week of phone use.

I’ve included them here even against my best judgment because I don’t believe I’m actually that unusual. As error-prone humans we are poor at properly accounting for how much time we waste. Or how many calories we eat. Or how often we’ll use things we want to buy.

But in this case, once I started measuring exactly where my time was going, I couldn’t lie to myself about it anymore. So when I discovered I was losing 25 hours a week (on average) to my phone, it made sense to me why I was struggling to get my To Do list done. Why I often couldn’t account for where are the hours of the day had gone and why I felt persistently behind.

It was clear to me that I needed to introduce some friction into my social media use on my phone. The three that collectively ate up nearly a dozen hours each week of my precious time we’re very predictable: Twitter, Facebook and Instagram.

Clearly I needed a way to put some distance between me and these time draining applications. 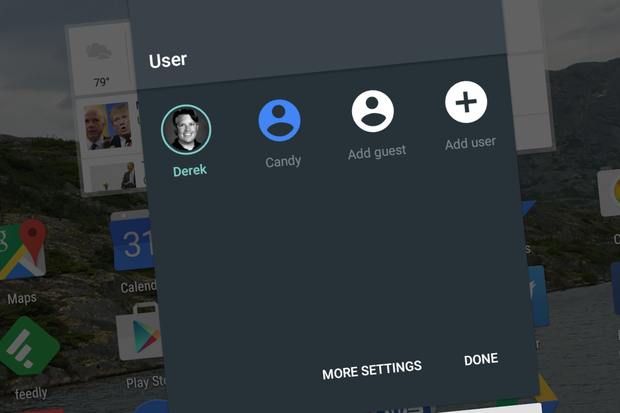 Android Lollipop’s User Profiles feature lets you create completely self-contained other “versions” of your phone, on the same device.

Not to pump Android’s tires again, but it has a clever little feature called User Profiles that lets you create a completely different user on the same phone. And while it’s quite easy to switch between the two profiles – all you need to do is tap the upper right corner a couple times and then swipe into the new profile – I knew my laziness. Merely having those applications in another profile, out of sight and out of mind, would likely mean that I used them less.

So I created the new profile, moved the offending applications into it, and deleted them from my main profile. I could still pop into the other profile and tweet, post photos on Instagram, or check my Facebook, but I was hoping most of the time it wouldn’t actually occur to me to do so.

After one full week of this church and state division, I compared that 25 hour “before” photo above with the “after” photos that represented my actual usage of the two profiles over a full week.

The results were as fascinating as the week’s before were horrifying. 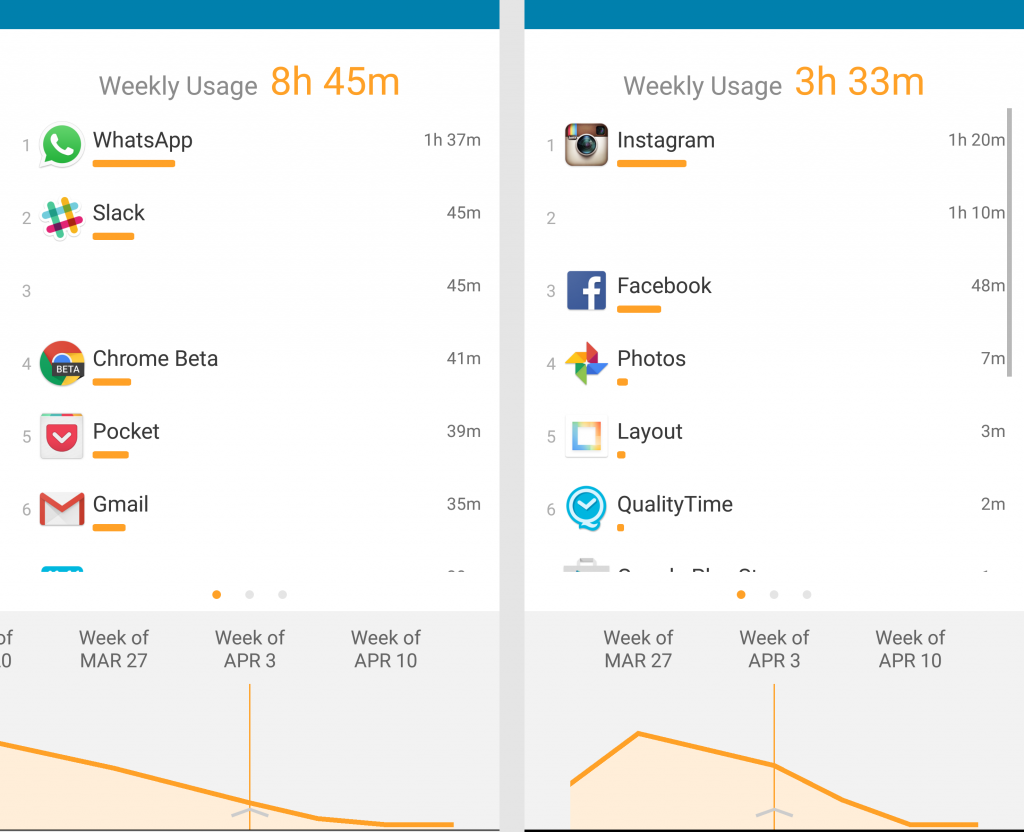 Usage of my two profiles, from the same week. Main profile on left, “time wasting” profile on right. Only 12 hours, combined!

I reclaimed about 14 hours of my week simply by introducing a slight barrier-to-entry to using these time-wasting applications.

In that first week, I found that I would pick up my phone and stare at it expecting something fun to happen. When I didn’t immediately see those applications, I would put it down and refocus on what I was doing. It took a while but eventually I trained myself not even to touch my phone when I didn’t have a work purpose for it.

Obviously there were still times where I dearly wanted to post an Instagram and I found my way to the other profile to do that, but now I use my phone far less. I’ve added back a huge amount of time that I can funnel into my business, fitness or kids. That week and the week since I have been greatly productive. I feel far more on top of my work than in weeks past when I couldn’t fully account for where the time had gone.

An interesting side note is that often when you plug one hole a new one appears. Users are very crafty: you fix one cheat, which just incentivizes them to find a new workaround. In this sense, I wasn’t much different than the users I design products for. I quickly found that I was flipping over to Facebook on my desktop more often now that it wasn’t as easy an option on my phone.

To address this issue I introduced just a tiny bit of additional friction on my desktop as well. There’s an easy-to-use plugin called Simple Blocker that allows you to turn it off and on at will, but when it’s on it will prevent you from accessing a user defined list of websites. I put the usual suspects on there, from Twitter to Facebook to Reddit to Google News and Pinterest, and found that whenever I instinctively switched over to typing in one of those URLs, the resulting 404 page made me acutely aware of how I was distracting myself from real work. 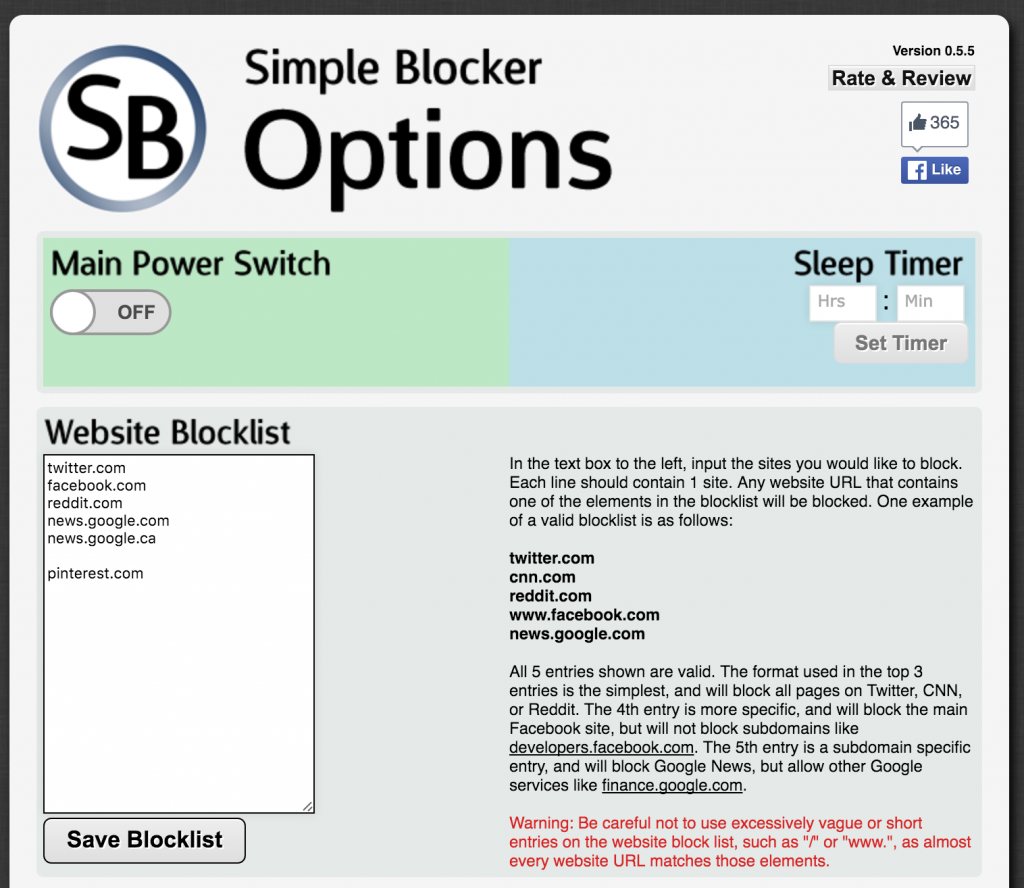 The config tab in my browser for Simple Blocker.

Again, it’s very simple to defeat this bit of user friction but I knew I was inherently lazy and probably wouldn’t take those extra steps to do so. In this case, I’m a great judge of myself.

So between a slightly modified phone and the addition of one Chrome plugin, I’ve restored two full work days of productive hours to my week, merely by relying on my own laziness.