We’ve just finished up our first full summer in Vancouver since we moved back from Mexico last year. Downtown was fantastic – full of things to do for families and always beckoning us to go for a walk.

And while we do have a car (an old, cheap-but-safe minivan), we rarely use it for anything outside of driving the kids to school, which is 15 kilometers away.

Already we probably drive far less than the average family, but this past summer was a great way to figure out just how much less still we could drive if we didn’t even have to drive to school. What we discovered was that we went an average of four days between car uses. In fact, there were weeks where we didn’t use our car at all, but others where we used it several times (i.e. groceries on a rainy day). 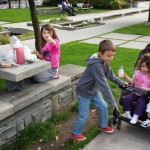 The kids love walking to Emery Barnes park and getting a picnic on the way. 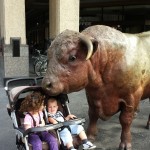 This statue of a bull is a (mostly) popular stop along our walking route. 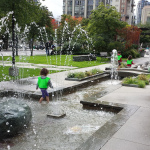 The kids used pinnies when learning how to stick together downtown, for my sake. 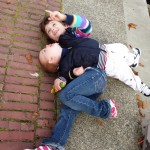 Indiana and Tristan getting very comfortable, despite the odds.

For short, inside-the-city trips we’d most often walk with the kids. It wasn’t uncommon to log up to ten kilometers in a day, with everyone on foot – including our two year old (well, sometimes he’d be on shoulders). We still do have a stroller, but we don’t take it out often and we scaled back from a double stroller to a single, to encourage all the kids to walk.

Riding public transit is entertainment unto itself for the kids, so if we had to cover a distance slightly longer or in inclimate weather, riding a bus, Skytrain, Seabus or Aquabus became part of the adventure.

Our family’s learned there are two keys to being out and about with young kids, without taking a car:

If you can master both those things, getting around in an urban environment is far more pleasurable, healthy and sane than driving the same routes. And we meet so many new and old friends along the way!