These days it’s common to hear people of a certain age (my age, let’s be honest) waxing nostalgic about the old days. We walked to school alone, rode our bike for miles, played until well past sundown, lit everything on fire, leapt off perfectly viable platforms and took the bus everywhere. Well, mostly to a suburban mall.

Snapshots from a successful first week of busing with the nerds.

Unfortunately, today’s squadrons of helicopter parents have stripped kids’ personal freedoms in the name of safety and competitive Facebook parenting. This has, in turn, brought about the “Free Range Kids” movement, led by Lenore Skenazy, meant to restore liberty and risk-taking to our kids, making them more robust and independent. You know, so that when they grow up they don’t need their parents to accompany them to job interviews. 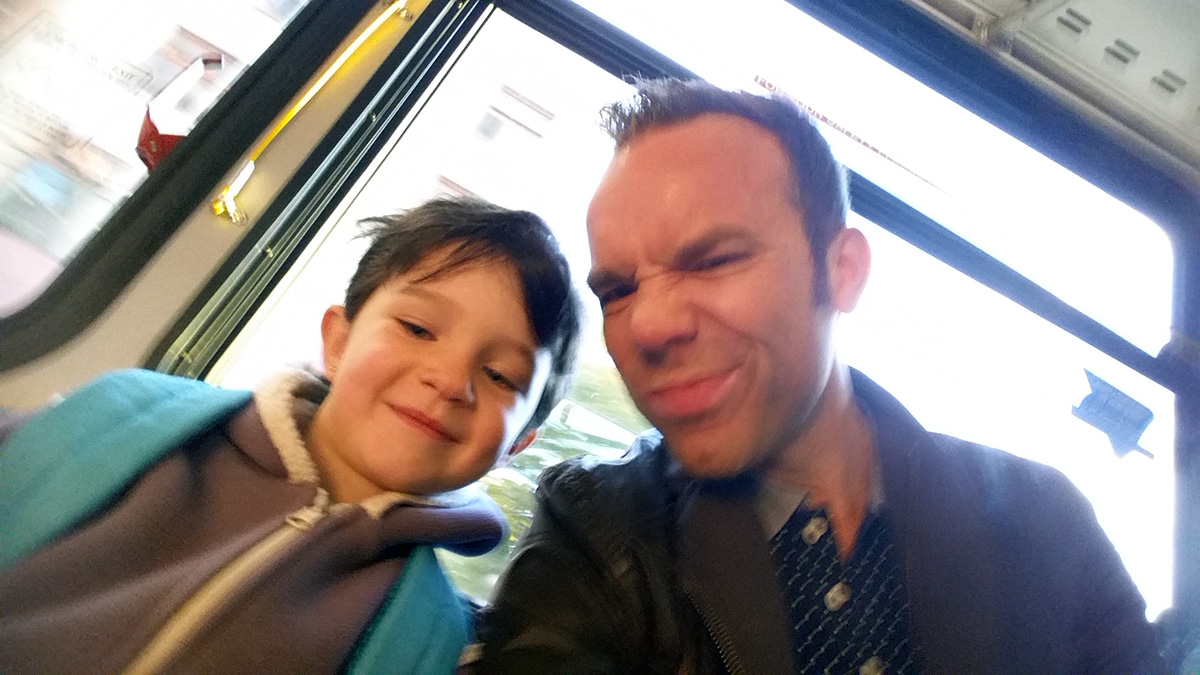 Harlow and I, chilling together on the bus.

With visions of my childhood freedoms firmly in mind, I’ve chosen this school year to train my kids to take the public bus to and from school.

Coincidentally, the week of October 5th was International Walk to School Week. This meant it was free to ride local buses here in Vancouver, among other places, which was great since getting five kids and an adult onto public transit can add up quickly.

So with my herd’s ultimate independence in mind, that week I rode the bus to and from school with them every day. Here are some things I learned:

Round trip, it takes me about an hour to drive the kids to school and return home. While the bus takes longer due to walking and waiting, the time spent with the kids is vastly more enriching. We talk while we walk, we talk while we wait, we talk on the bus. Their dad has no other distractions – such as piloting a motor vehicle through rush hour traffic – to distract him. They get my full attention and I get to relax and enjoy the ride. 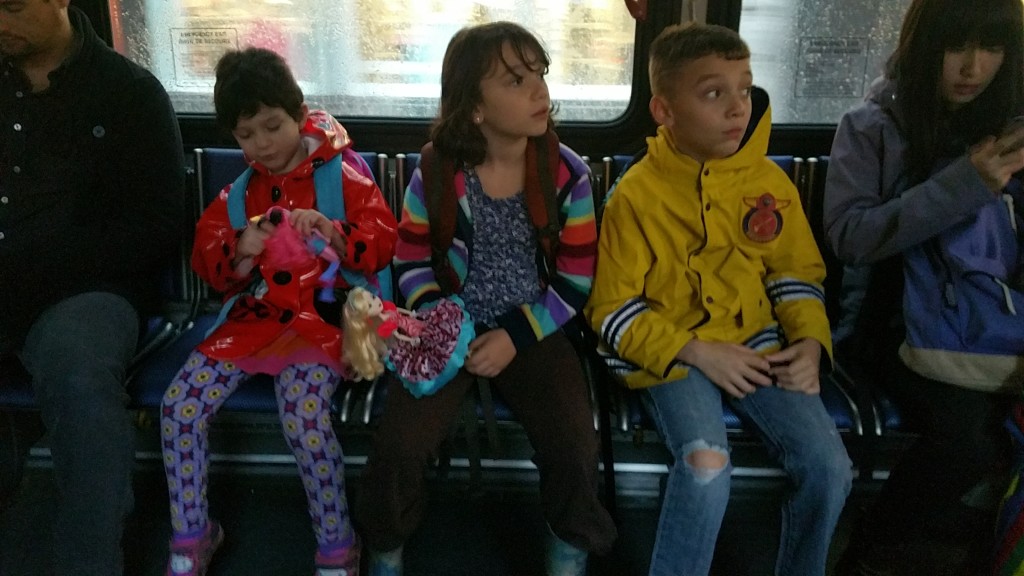 Just another group of commuters, on their way to school on a rainy day.

Before this experiment, I was worried that one of my high-energy boys would lose it on the bus and become an uncontrollable spazz. That didn’t happen. Instead, the kids mostly froze in place as they were surrounded by adults on their way to work or school. There’s something calming, or perhaps merely intimidating, about being in that environment – for them, anyway. Whatever the reason for their good behaviour, I loved it. No more screaming from the driver’s seat for them to stop hitting each other in the back of the van.

3) Not Everyone Loves Transit

For precisely one trip that week, I asked our nanny to travel with four of the kids on the bus to school instead of driving them there. She rarely takes public transit and as she told us later, she clearly didn’t enjoy the experience at all. She was particularly outraged when one bus, inexplicably, zoomed right past her and the kids without stopping to pick them up. However, as I’ve since told the kids, “stuff happens” is the name of the game with public transit sometimes (just as it is with driving, come to that). Sometimes buses are crowded and don’t stop; sometimes trains don’t run on time. Patience (and a good book or an iPad!) can help soothe a young commuter’s mind. 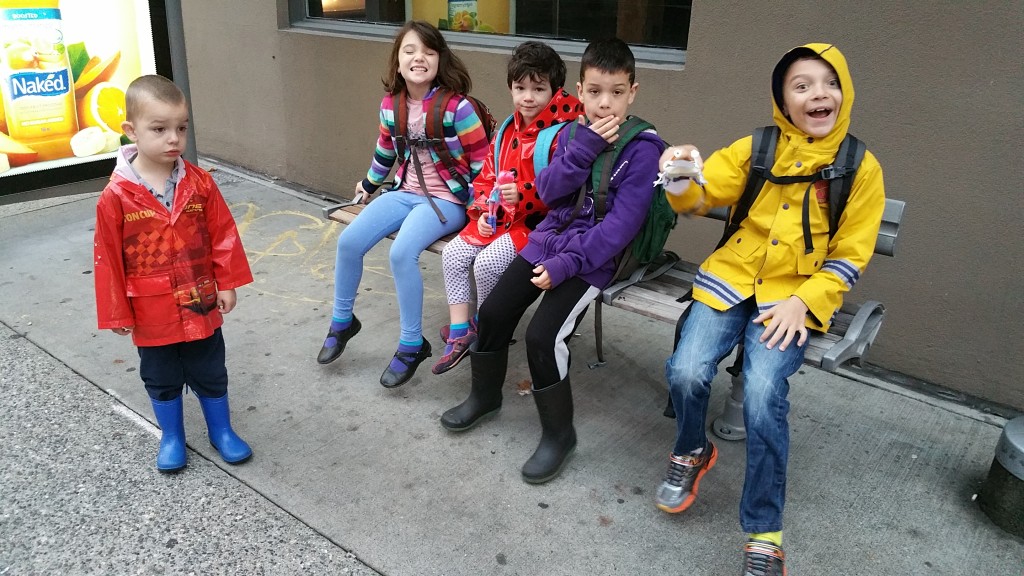 All the nerds waiting for the bus at the stop across the street from our building.

The first day of “bus week,” my middle child didn’t like it much. But by day two, the girls were asking me if they could ride the bus on their own. By day three, the boys were positively convinced I wasn’t needed anymore – they could do the ride on their own. But while Japanese kids are really independent from a young age, in North America this is less the case. Regardless, the quest for independence is strong in this group.

But as eager as the kids are to ride the bus alone, there’s more to transit than simply knowing what stop to get on and off at. As the old adage goes, anyone can steer the ship when the sea is calm. Over the coming months, what I’ll be teaching them is what to do when things aren’t going perfectly on transit – say, if a passenger is bothering them, or the bus misses their stop, or they get separated. In software testing, we call those “edge cases” due to how infrequently they come up. 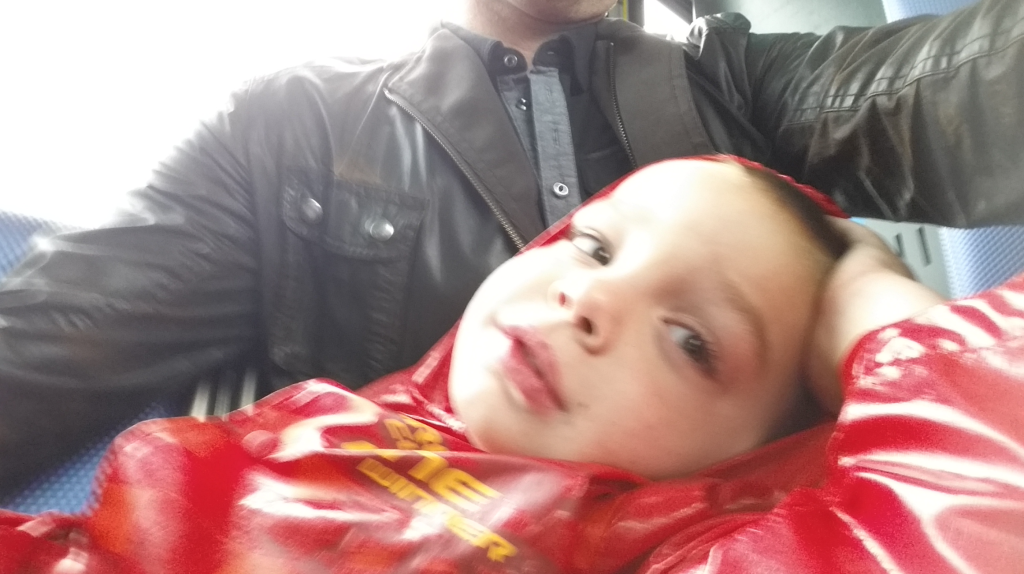 My youngest lounges on my lap during a bus ride.

While it’s early days so far, the kids attitude toward transit has been totally awesome. They’re eager to sell the car, in no small part because, as my oldest daughter says, “then we can buy me a new bed!” More on the new bed and the car sale later, but for now wish us luck as we continue our transit training. One day this school year these nerds will be ready to do a trial trip on their own!