Making the best use of limited space is a constant effort in refinement. Everything has a footprint and if we can clear up floor space, that’s just more real estate for kids to live and play in. With five kids in a condo just over 1000 square feet, it’s especially important to keep things off the floor.

In the last year we’ve done a few major things to free up floor space. Taken individually, none are revolutionary. But together they’ve created huge amounts of usable space for the kids.

When we first moved into our condo, we had the same setup we do now: three boys in one room, two girls in the other (slightly smaller) room. For the girls, our first idea to accommodate two beds was a toddler bed, coupled with a slide out trundle. When the trundle was pulled out, as it usually stayed, virtually all the floor space in the room was taken up. It also resulted in blankets everywhere and an unhappy four year old (then three) who felt her trundle put her on a lower level than her big sister, literally. 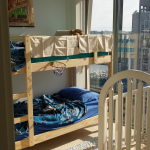 Original bunk and crib combo took up nearly all floor space in room. 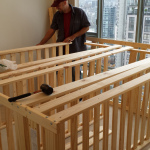 Owen came in and merged two IKEA bunks together to create a triple bunk. 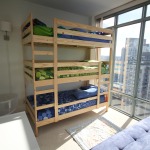 The finished product is a triple bunk that let’s all three boys sleep in one bed! 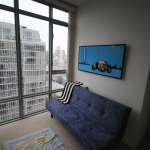 Crib was removed, made room for a guest bed for friends’ sleepovers.

In the boys room, our then almost two year old was still in a crib, and the two older boys had a bunk bed on the other side of the room. Three beds in one relatively small room (although bigger than the girls room), left only enough space to change diapers on the rug between the beds, but no room for playing.

What we decided to do was find a contractor who specialized in “IKEA hacks”. Owen Thomas, from North Shore Pro Handyman listed this as one of his specialities and boy did he deliver.

We did away with Harlow’s trundle bed, buying instead two toddler beds of the same type from IKEA. Owen then built a structurally sound system for pairing the two beds together creating a toddler bunk for the girls room as there’s not enough room for a full size bunk. This freed up a huge amount of floor space, giving the girls room for a rug and a play area in their room. And bunk beds they love, with individual reading lights as well! 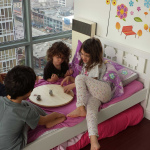 Original girls bed with trundle underneath. Took up all floor space when out. 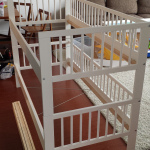 IKEA toddler beds during construction, stacked on top of one another. 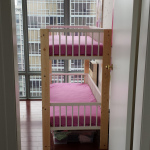 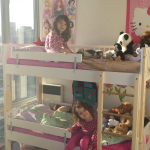 And finally, the girls love having their own bunk beds in their room.

What we built in the boys room took full advantage of the higher ceilings in our sub-penthouse condo. We ditched the crib (one of those dangerous drop-side ones), taking the chance that not-yet-two Tristan would be fine sleeping in a regular bed. This was an all or nothing proposition as the crib was gone before he tried sleeping in a big boy bed for the first time.

We then bought a second bunk of the same type the boys already had – also from IKEA – and Owen drew up plans to combine and reinforce both bunks into a towering triple bunk. The result is a truly impressive triple bunk that’s so solid the kids play on it, scaling its face at times rather than the ladders. Each boy has their own full size bunk and their room was left with enough space for a sofabed the boys use when they need some quiet time to read or a friend sleeps over.

All told, these two IKEA hacks turned small condo rooms into totally functional sleep/play/sit areas that get used by the kids far more than they used to. All told, we probably saved over 20sqft of floor space with these two modifications!

Have you made some innovative hacks to in your kids’ bedrooms? Let me know in the comments!