An interesting thing happened last week. Perhaps a milestone in notoriety for this site, or merely a part of its evolution. I’m still deciding which.

CTV, one of Canada’s national broadcasters, airs “The Social,” one of those midday panel chat shows. It’s not the biggest outlet to cover 5K1C (this month we’ve been featured on the front page of MSN.com, Good Housekeeping and in the Daily Mail), but it is the first TV show to feature us without trying to contact me beforehand. 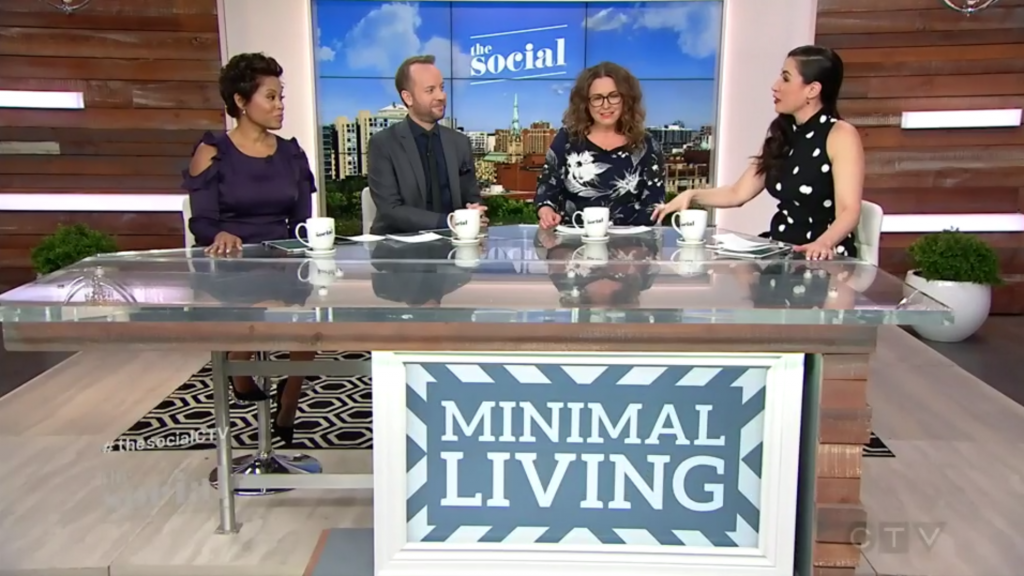 The Social’s hosts debate the merits of the 5K1C lifestyle.

The Social’s panelists spent several minutes or so debating the merits of the 5K1C lifestyle (segment begins 8 mins in). The Social’s lone male host adopted a contrarian angle. Key to his argument was that I was, “forcing” a minimalist/condo lifestyle on my kids. He wondered what they thought of it, if they were cool with it, and so forth.

I’ve heard this argument before. Usually I get a smattering of negativity in the comments section of any online article and someone invariably accuses me of forcing my kids into this life. But this was the first time someone in the media had attempted to advance it.

The best part about these comments are how they reveal the person’s own societal programming and inherent bias. In their view, there’s clearly a lifestyle that’s OK to force on our kids, and one that’s not.

This photo taken yesterday on our walk home from the bus. In the nearly four years I’ve been divorced, I don’t think I’ve felt as positive about parenting as a single dad as I do today. These guys make every day enjoyable and the older they get, the more we all learn and grow with one another. So lucky to have my little animals.

My kids are young, and like most kids their age, they can’t see the long game. If I were to let them choose anything for dinner, they’d eat chocolate cake six days a the week until they came down with scurvy. This is why I “force” them to eat vegetables. I also force my kids to say “please” and “thank you” on those occasions when it doesn’t come naturally to them. I force them to tidy up around the house or do chores to earn certain privileges. I force them to take on challenges, accept responsibility, stand up for themselves, and a host of other things that probably feel tough or uncomfortable to them at the time, but will ideally contribute to their wellbeing one day in the distant future.

Alas, every parent forces a way of life on their kids, unless their house is Lord of the Flies and the kids are calling all the shots. The fact that the way of life I’m forcing on my kids is seen as unnatural by some (the TV host included) is only a function of our North American narrative that has us believing that a single family house, two cars and a yard is what kids need. Step off this continent and it’s that same North American “bigger is better” narrative that’s seen as unnatural and forced.

Our kids don’t need a 2700 square foot house any more than they need the red Power Ranger. What our kids need from us the most is our time, attention, love and care. The fact remains that I have vastly more time and energy to spend on my kids than if I had to pay for a big house and a car, or waste time commuting. The typical American working family works January through April just to pay for their cars, but is anyone talking about how those parents have forced that irrational lifestyle onto their kids? (Besides me, of course.)

Living a more sustainable, minimalist, urban lifestyle is something I force on my kids because I know in the long run, the skills and awareness they acquire now will make them better people. The progressive viewpoints and culturally diverse world view they gain from growing up in an urban context will make them more empathetic. The awareness of how few material things they need to be happy will (hopefully) keep them off the hedonic treadmill of mindless consumption. And thinking twice about environmental impact of operating cars and huge houses might lead them to make better choices when they eventually move out on their own.

As hard as it may be for them sometimes, it’s just as hard for me. There are rare days where I’m acutely aware of how much easier it would be to drive instead of walking or busing, for instance. But the independence, confidence and additional safety the kids gain from being able to navigate the city on their own is invaluable (and mostly unappreciated by car-dependent families). It’s also a more sustainable transportation method than driving, so an important daily choice to model for my kids. That’s just one such decision I’ve made for my family that, while unpopular at times, results in my kids being more confident, healthier versions of themselves.

On our way back from the suburbs via bus, Seabus, and Skytrain. Hope y’all had a wonderful Christmas! A post shared by Adrian Crook (@adriancrook) on Dec 25, 2016 at 7:39pm PST

I acknowledge all this work my family is doing today might not be something my kids appreciate until they’re older, perhaps not until they’re adults. But just because they don’t thank me for every minute of it now, isn’t a reason not to do it. I’d have to be pretty short-sighted to seek daily validation of my parenting choices from my kids.

As parents with young kids watching and modeling our every move, we make important choices every day. Hopefully, those choices are intentional and informed by our values, rather than letting our bias and societal programming take the wheel because we believe that’s the right way.