This is the second article in my Life Redesign 2016 series. Last time I wrote about how the kids are learning to cook family dinners (we’ve got another lesson starting in 40 minutes, as I write this). In upcoming articles, I’ll detail more tweaks I’ve made, from personal fitness to home design, family roles and more. Psychological health, specifically fulfillment via creative pursuit, is what I’m touching on today.

I recently had an empty space to fill as the art that had previously resided there had moved out. 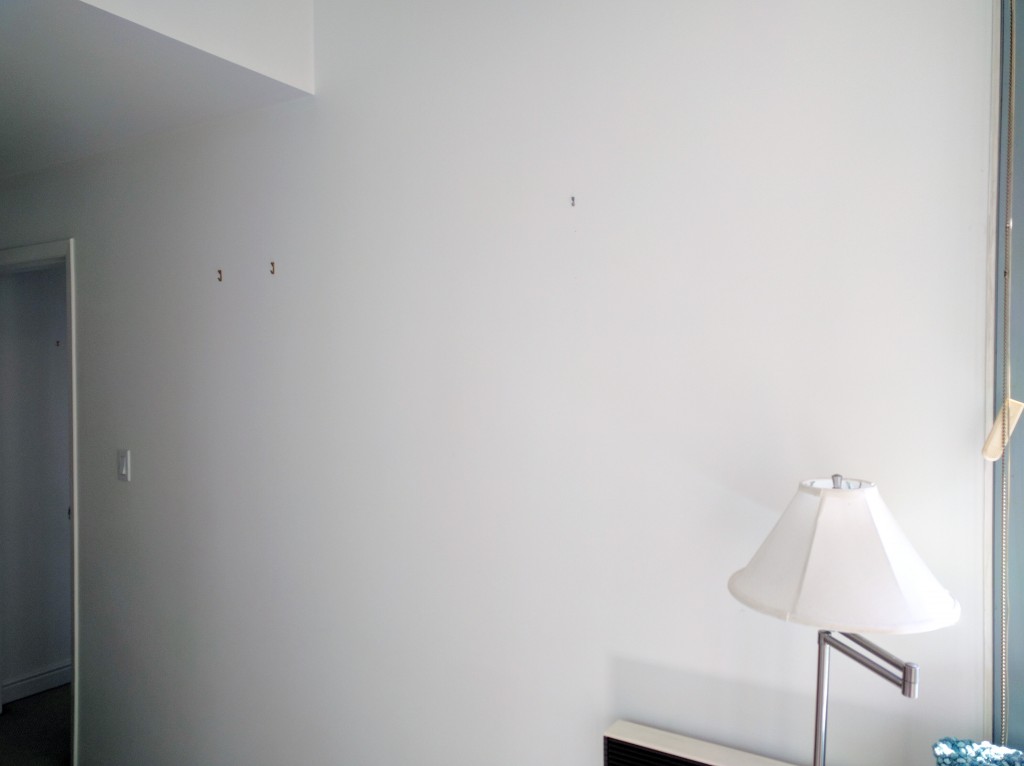 The offending wall – way too blank, it needed to be fixed pronto!

When I looked around at options for acquiring new art, I found that the stuff I really liked ran well into the thousands of dollars range. At the other end of the spectrum was temporary “art” from IKEA, HomeSense or Winners – which was still several hundred dollars for a fake reproduction of something I didn’t really like much in the first place.

Neither option worked for me, but leaving the walls blank just reminded me of things I didn’t need to be reminded of. So that wasn’t an option. 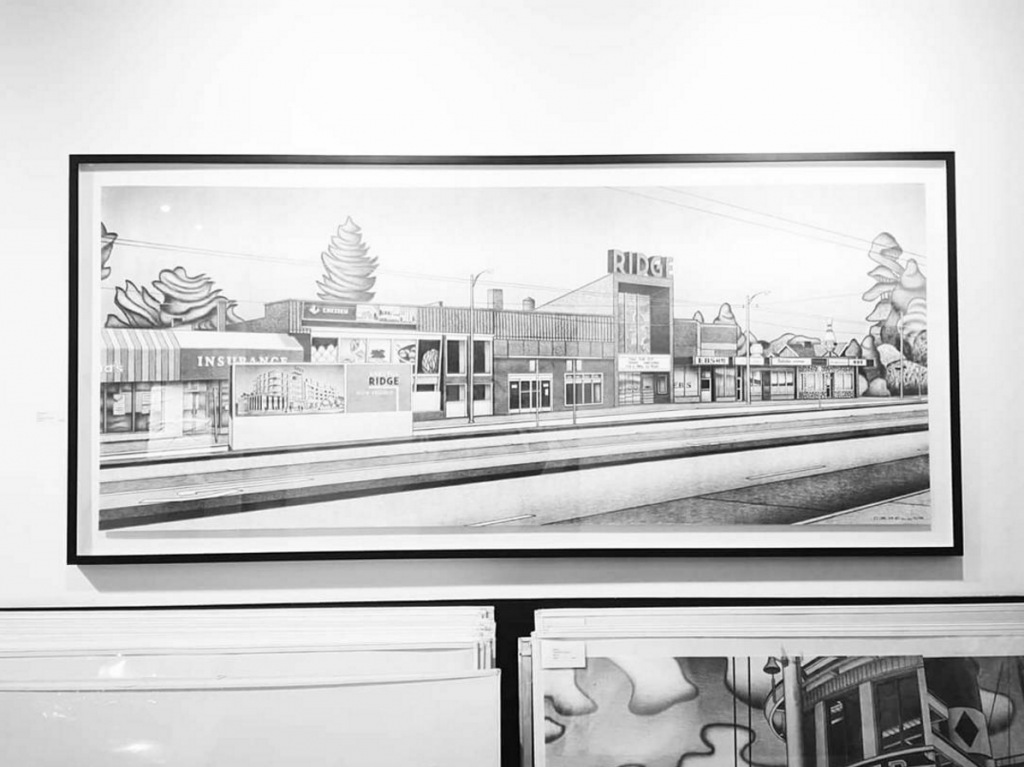 If I had the money, I’d buy one of these pieces from local artist Charles Keillor. Alas, I don’t have several thousand laying around for art, so I had to get creative.

I hummed and hawed and looked at that same IKEA Flatiron Building poster that everyone seems (still $200!). Ultimately, I decided that I’d rather create my own art then buy substandard versions of someone else’s.

With that in mind, I traipsed down to Opus, my local art supply store in Gastown, threw myself at their mercy, and spent about $400 on three large canvases of varying sizes, acrylic paint, brushes and painter’s tape. 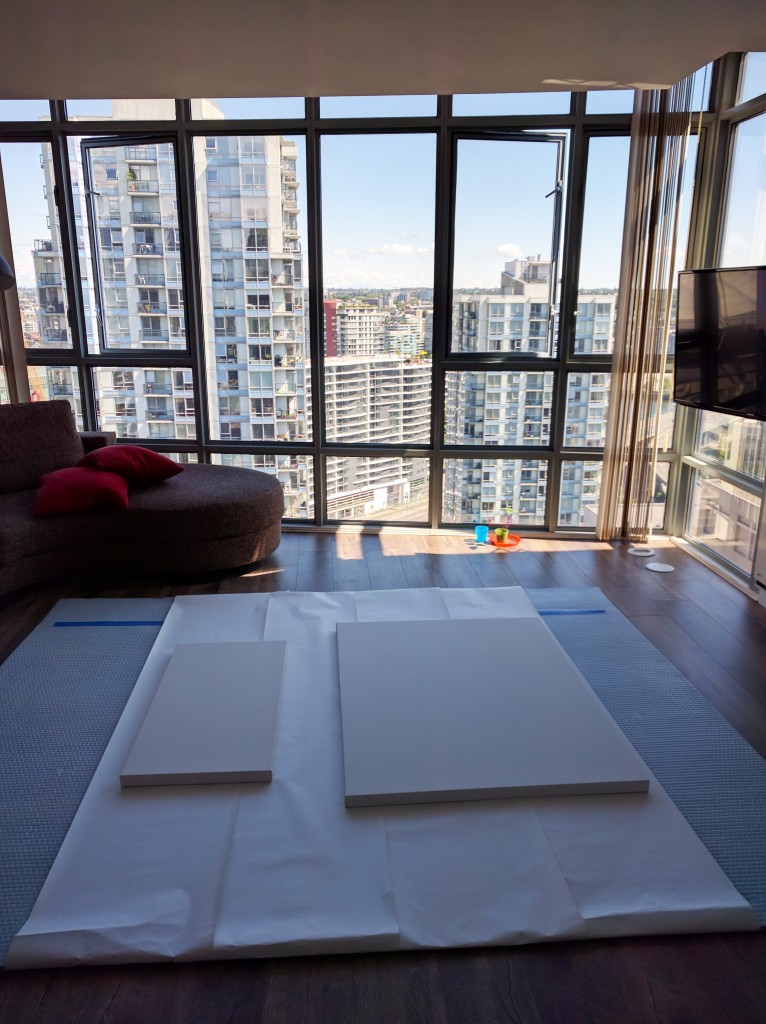 Two of the canvases laid out in the living room turned art studio, ready for ideas…

I had no idea what I was going to use them as I had no particular piece in mind, but I knew that whatever I created with these materials would be more valuable than if I had spent $400 on a poor copy of pop art that I’d no doubt grow tired of in a few months.

These days, the kids are with me on a two weeks on/two weeks off schedule. So when they’re not here, I have an abundant amount of floor space that I can devote to painting. By simply rolling up the carpet and throwing down some paper, my entire living room was converted into an artist loft. 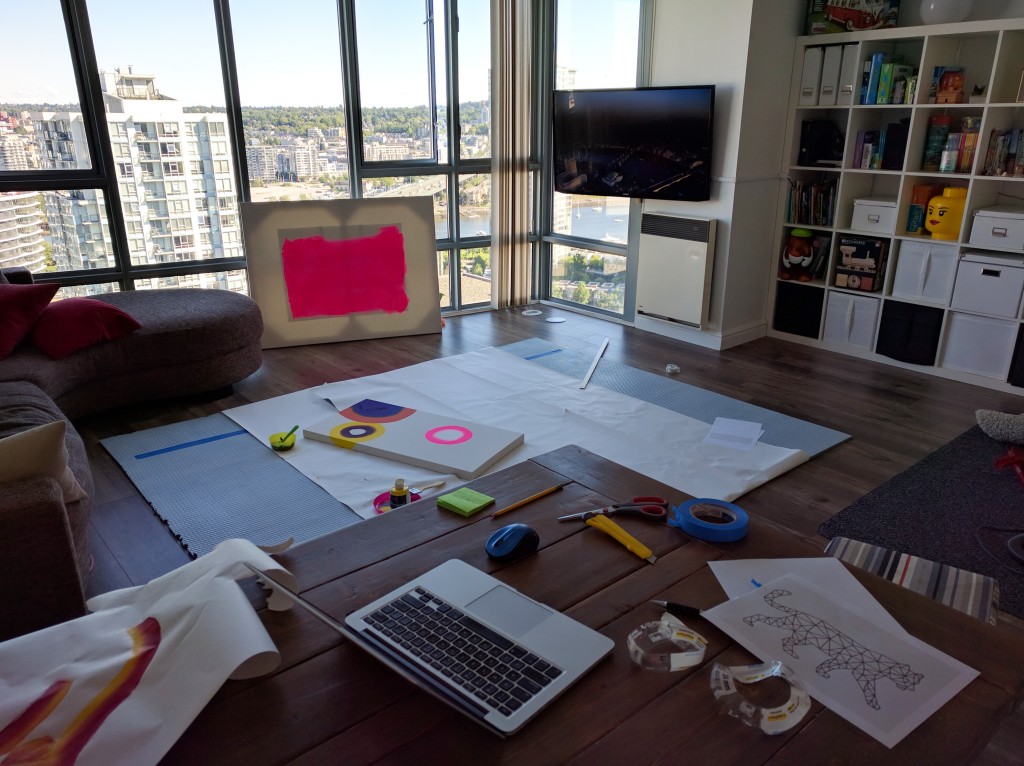 Initial idea and base layer phase. Getting design down on paper, then being able to see design through the morning sun, to apply tape.

At the time, I was feeling like my sense of family had been shaken. So for my piece, I wanted something that connected me with my identity in my family. And in our family, each of us has an animal. Mine’s a tiger, my oldest’s is a white owl, and from there on down it’s koala bear, baby seal, red panda and baby tiger.

My identity is also heavily technology-based, as I’ve worked in the videogame design field for over 20 years. I wanted my painting to reflect that part of my nature.

What I settled on as the subject of the painting was a polygonal representation of a tiger. 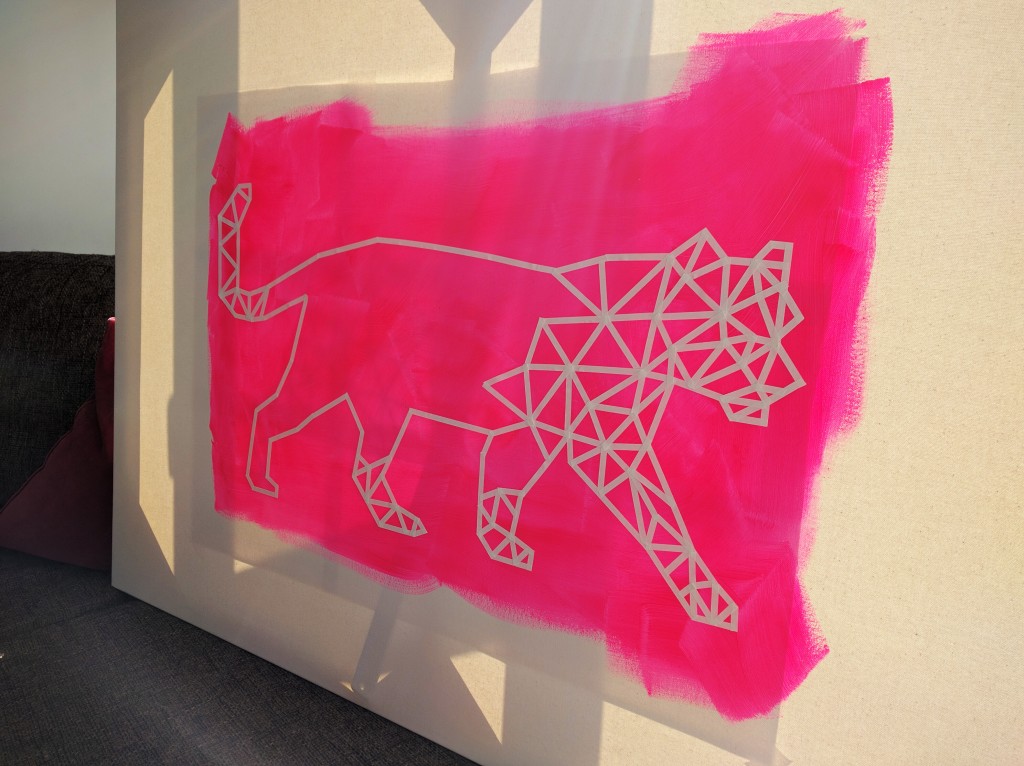 Way more taping than I anticipated. And because it could only be done in bright light, it was sweaty, intermittent work.

From a colour perspective, I wanted the tiger to be the antithesis of a typical masculine tiger. Something that ran counter to expectations and depicted some depth of feeling. I went with a pink background that I would then tape over to create the tiger’s lines, before applying two different shades of blue.

The blue coats created diagonal lines (five of them in the case of the light blue line, as five’s my lucky number). The diagonal lines themselves conveyed motion – a tiger continuing to move forward into the deep blue darkness of night. 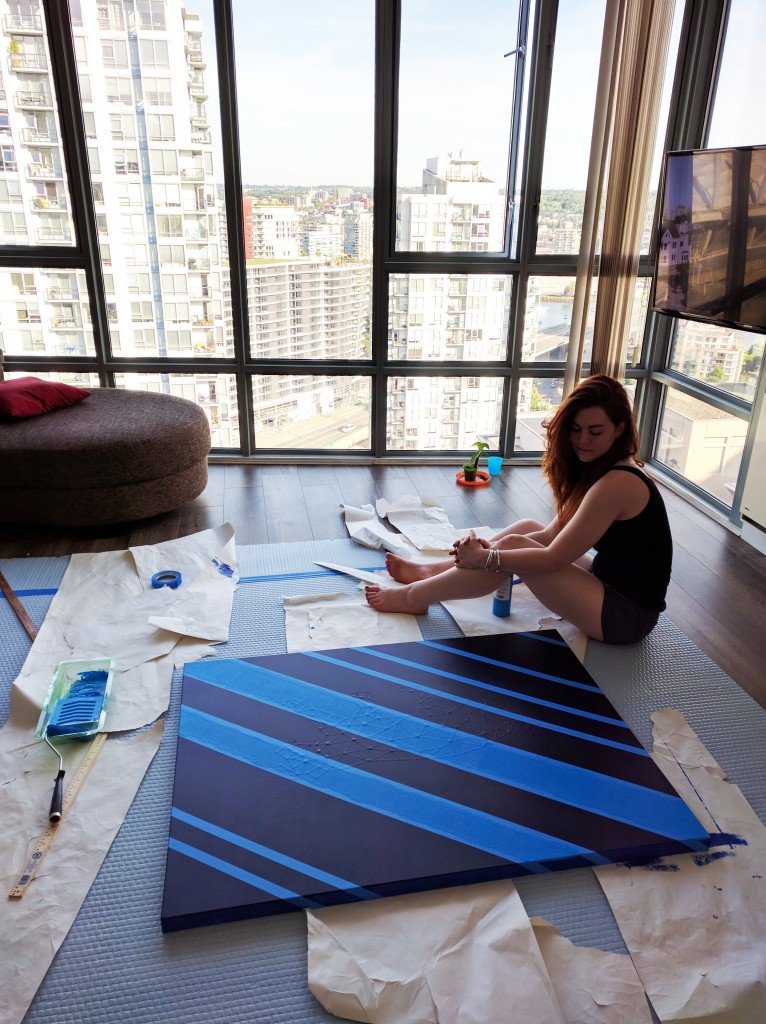 Alex sits beside the in-progress taping of the light blue lines. Went with diagonal and asymmetrical spacing.

Over the more than two-week process of my painting, I inadvertently discovered how effective art therapy truly is. When I was working on my piece, I was fully engrossed in it. I’d block out everything else. All my anxiety vaporized and I was wholly consumed by the task at hand.

Even when I was away from my painting, I thought about precisely how I was going to get the effect I was looking for. It was a puzzle I was constantly trying to work out – from the order of taping things off, to how many coats I’d require of certain colours, to design changes and tweaks I made on the fly as my confidence grew. 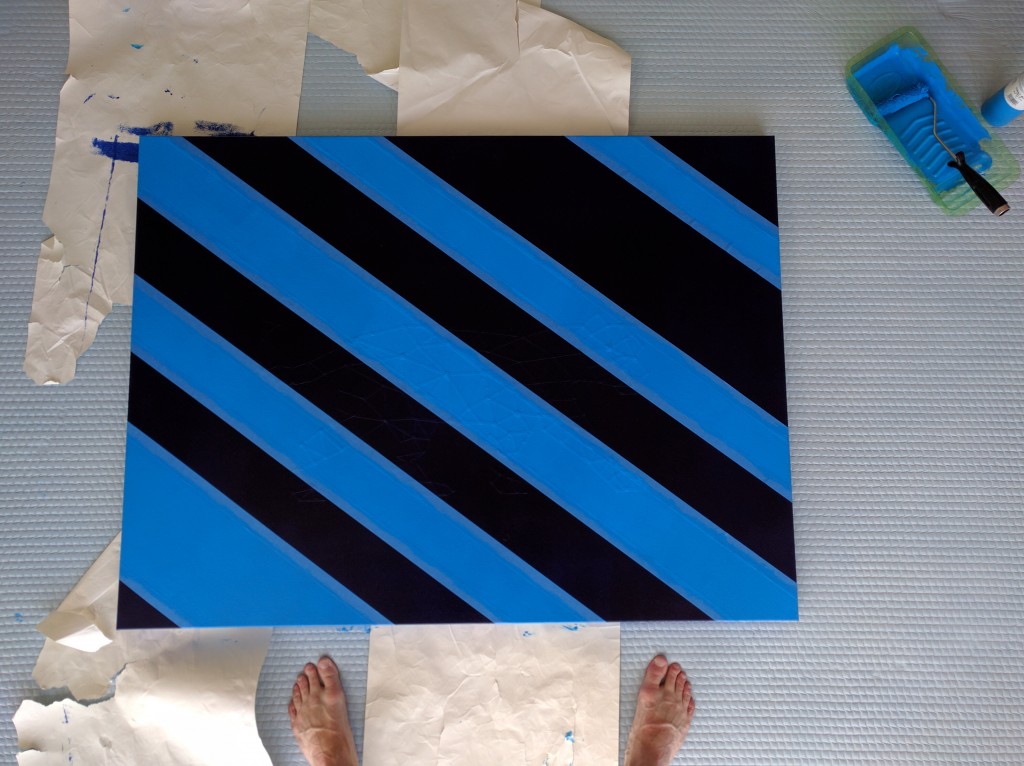 Lines and coats all done, only thing left was to wait until it was dry enough to start removing all the tape, right down to the tiger itself.

It should be noted that I’ve never painted before in my adult life. This was an entirely new pursuit born out of a desire to create. In my day job, I create only ephemeral work: documents, emails, ideas, software. Certainly nothing you can hang on your wall, look at day in and day out, and say, “I made that.”

A side benefit of this newfound passion came when my kids saw me finishing up the piece over the first few days they returned from their mom’s. Even before I’d removed the last bit of painter’s tape to reveal the full design, they all set about painting and drawing their own versions their family animals in our makeshift art studio. In their heads, it reinvented who their dad was. They’d never seen me create art. It expanded their notion of who I was to them, what fathers do and what’s possible in the boundless realm of the creative. 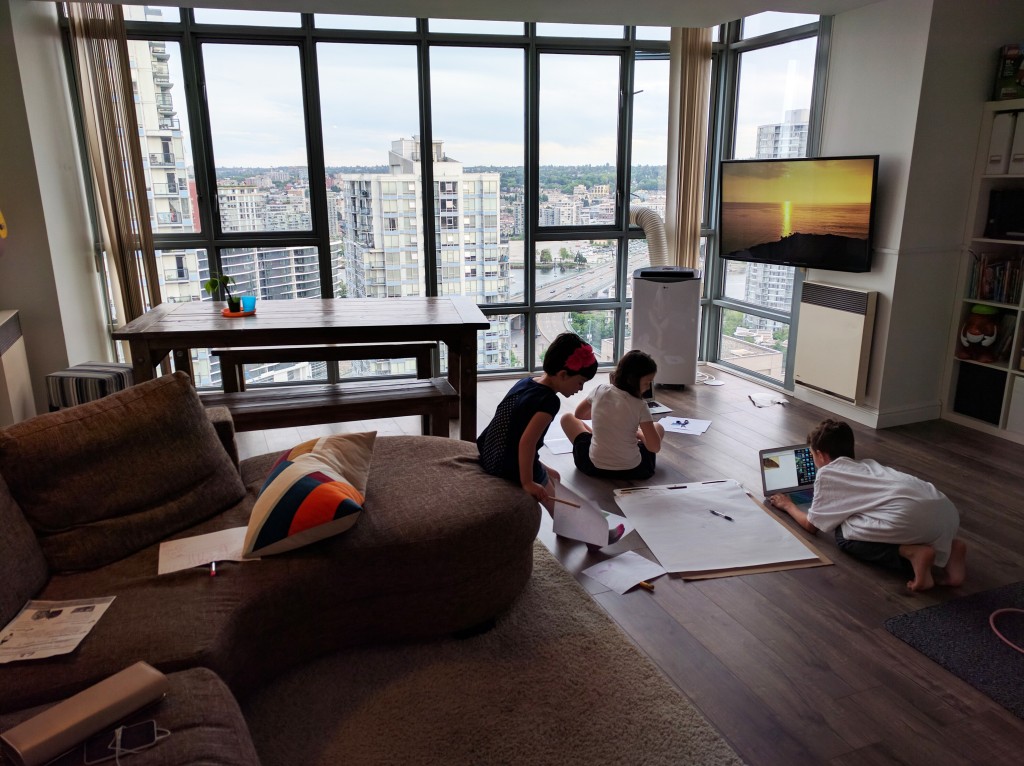 After seeing my painting being completed, the kids instantly set about create their own animals as art pieces.

Even I was a little surprised how well “Maple Tiger” (what I named it) turned out. Despite that, I of course look at it and see countless flaws. There are things I would do differently, but that’s life. Everything we challenge ourselves with is a process of growth. I started out thinking anything I painted would look terrible. 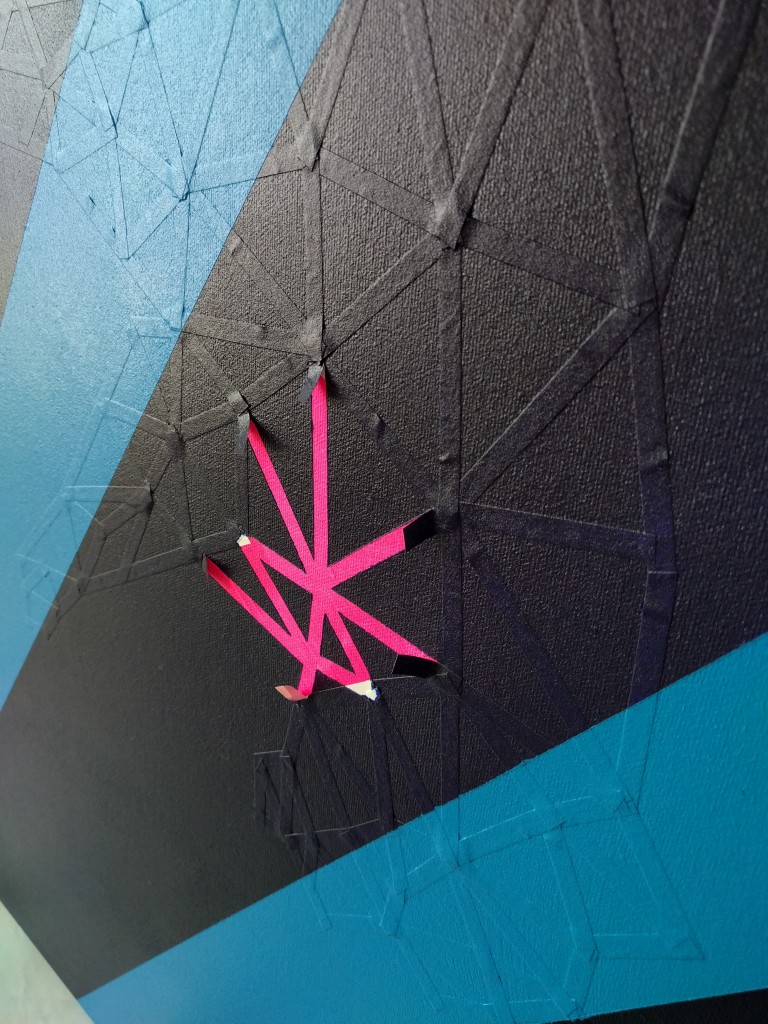 Slowing beginning to untape the tiger. This was stressful work…

During the process, I worried that I’d got in over my head – the taping part alone took far longer than I thought and I went through several different tape types to get exactly what I was looking for. But now that it’s done I have some experience, knowledge and confidence to bring to my next painting. And the courage to throw myself into things I’ve never done before.

As I mentioned in my previous post about teaching my kids how to cook, the really fun stuff in life is often found in the margins. Not the things you buy straight off the rack or call up a high priced professional to provide. Often, there’s not the same emotional connection or authenticity when you take the conventional path. 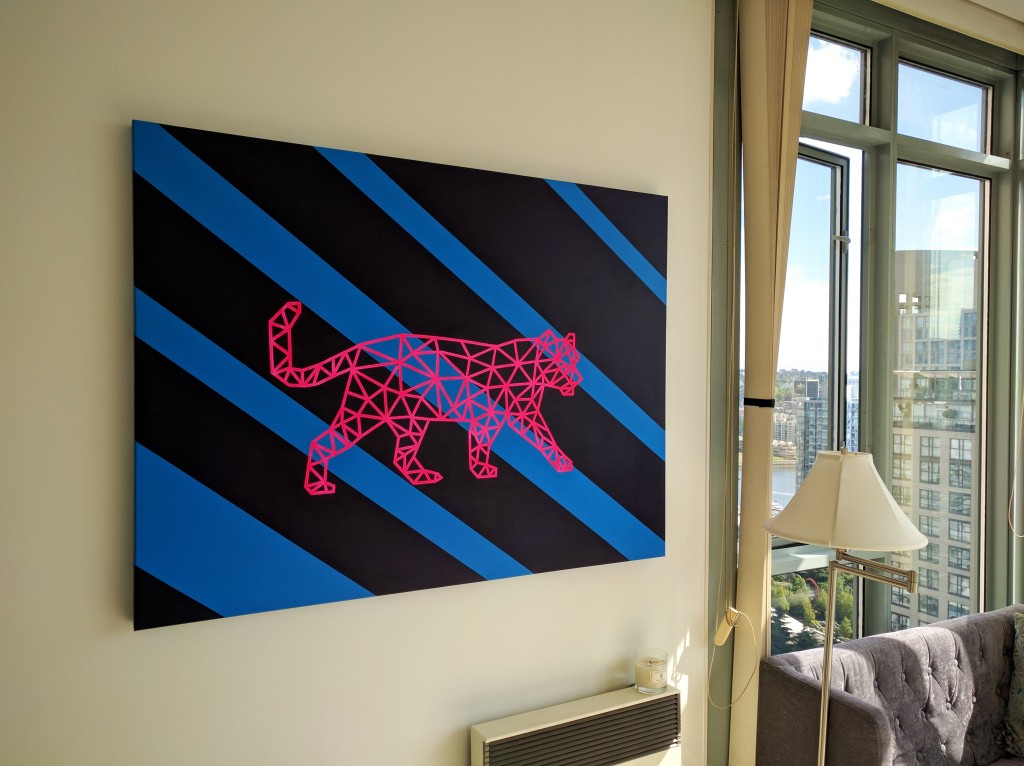 It was extremely satisfying to complete a piece of art that I could be proud of. It’s something that came from me – as opposed to a store – and represents not just the tough time I was going through, but more importantly the creative, productive way I dealt with it.

Maple Tiger ultimately filled more than just the empty space on the wall.

Marshmallow roasting on the 29th floor in November